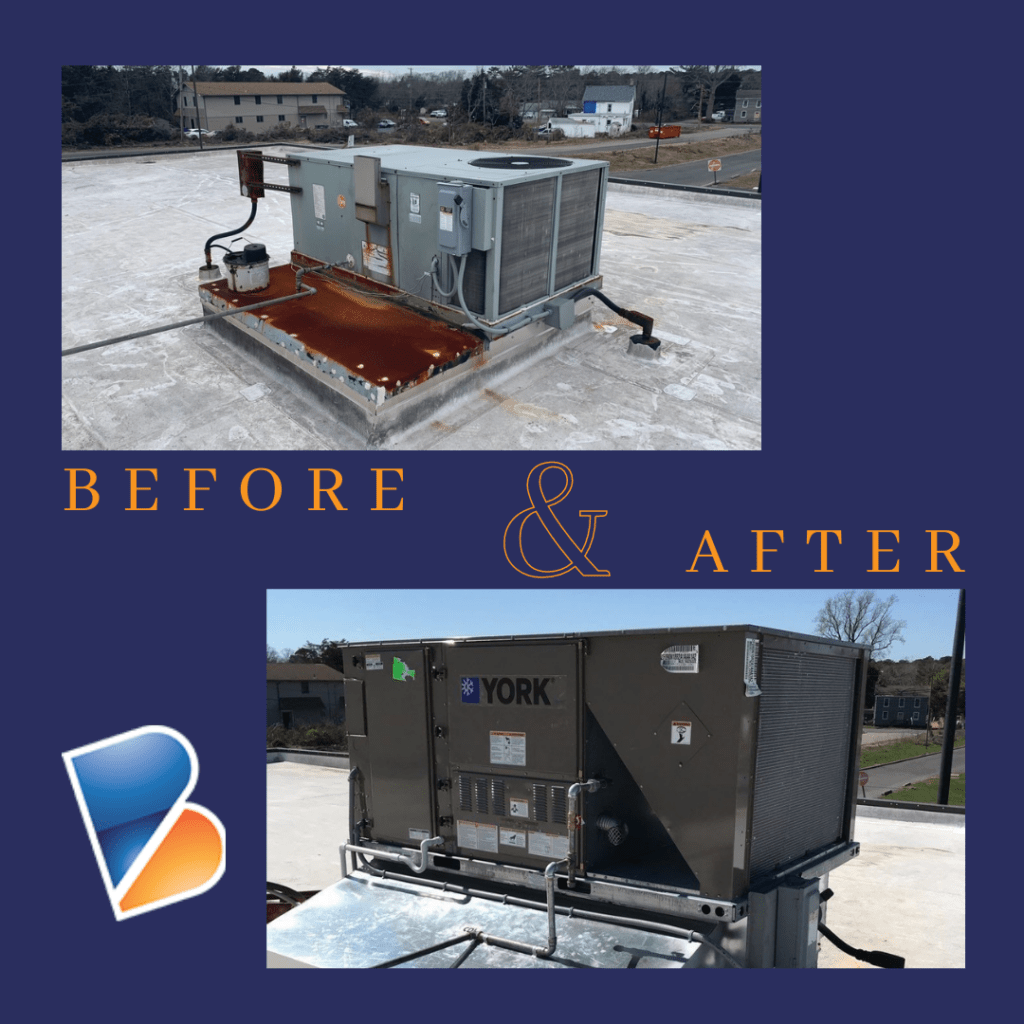 Problem: The rooftop air conditioning system that kept the server room cool in a large distribution center stopped working due to a bad blower wheel and rotted heat exchanger.

Solution: Installed a York 7.5-ton two-stage system to avoid cooling problems the center experienced in the past. Expedited installation to avoid damage or interruption to their computer system.

Time was of the essence for a longtime commercial HVAC customer. In April, just as the weather began warming up, their heating and cooling system stopped working. And, for a large distribution center, the problem extends well past comfort.

The problem was their server room: It needs to remain between 65 and 75 degrees F all the time, with humidity between 40 and 50 percent. The equipment will become damaged if the climate drifts outside those parameters for too long.

And, that’s what was about to happen when the rooftop air conditioning system suddenly stopped working.

And, what was coming through was warm instead of cold!

In the short time it took for them to call us, the air conditioner stopped blowing air completely — a sign that things had gone from bad to worse.

We made arrangements for a tech to get out there ASAP. While all our customers are important, we also understood that their business would soon grind to a halt if the computer network went down.

Fortunately, we could diagnose the problem quickly and get a new system installed right away. There was even enough time for the property manager to consider, and eventually greenlight, an upgraded AC that would perform better than the previous model.

As a result, this distribution center not only avoided catastrophe. It also got a climate control upgrade!

In this case study, we’ll cover:

And, along the way, we’ll stress how important it is to call for AC repair right away, even if you notice only a minor problem. Call Broadley’s at (609) 390-3907 for commercial heat and AC repairs in Cape May and Atlantic counties in New Jersey.

So, what was wrong with this rooftop air conditioner in the first place? Our tech found two problems at play: A broken blower wheel and a damaged heat exchanger.

The blower wheel is the part of the AC that pushes air from the system down through the vents. So, the air may still get cooled inside the system, but it won’t go anywhere if the blower wheel’s bad.

In this case, an employee noticed the problem while the blower wheel was damaged but still working a little. In its damaged state, it at least provided weak airflow until it broke down completely.

Related: How To Know It’s Time To Replace Your Air Conditioning System

The bigger problem here was the rotted heat exchanger. That’s the part of the system where heat gets removed from the air while the system’s in cooling mode (In the winter, it’s where the gas combusts to generate heat).

This needs to be closed off completely. Otherwise, there’s no control over the cooling process. As a result, you get warm air because there’s no way to keep it cool.

The damage also results in bad smells as various chemicals and substances escape or enter the system where they shouldn’t.

Check Out Our Current Specials

Cooling Needs For A Server Room

Climate control is essential for a server room. You can consider the brains of a company’s computer network: All the internet access and internal communication flow through the computers, or servers, here.

In this case, the distribution center literally had hundreds of computers in racks. All those electronics generate heat. But, they’ll overheat, and the components will melt if the temperature in the room gets too hot.

And, they can’t be exposed to the elements. So, the room has no windows and relies entirely on the HVAC system to maintain the temperature.

Humidity’s also a concern: Too much moisture in the air will damage the metal and electronics as it condenses back into liquid, often inside the units.

That’s why we treated this job as an emergency: It was only a matter of time before the servers began shutting off or corrupting and losing data.

The big improvement our property manager opted for was a two-stage AC instead of another single-stage system like the building had before. This upgrade meant a more consistent temperature with smaller temperature drifts, plus better dehumidification.

Most homes (and businesses) have a one-stage heating and cooling system: When the temperature moves a few degrees away from the thermostat’s call setting, the system kicks on and over cools or overheats the room by a few degrees.

Then, it shuts off until the temperature moves too far in the other direction again.

The two-stage system offers more control over the temperature because there’s also a low-speed option. Instead of only turning on or off, the system can also run at less than full power.

This way, it maintains the temperature more consistently than only turning on when the server room starts getting too hot.

And, since the system runs more often, it also spends more time dehumidifying as part of the cooling process.

Under the circumstances, we completed the air conditioner replacement for this distribution center in Marmora, NJ is less than 24 hours. The diagnosis took very little time. And, since the property manager had used us for years already, we had a good relationship and worked quickly to help him find the perfect replacement and upgrade for the center’s cooling needs.

If your South Jersey commercial heating or cooling system is nearing the end of its service life, or if you suspect there’s a problem, click below or call (609) 390-3907 to make an appointment with Broadley’s.