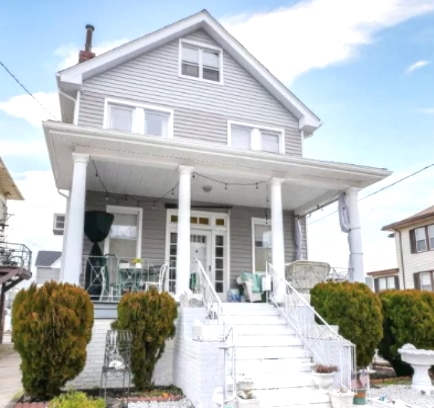 Far too often, replacing any part of your HVAC setup is a stressful affair. In our experience, too many people let a lot of problems and warning signs go by without calling for repairs. Then, by the time they call us, it’s too late: There’s nothing left to do but replace the unit.

Of course, we understand why this happens. Replacing a boiler or water heater is a huge expense! People often need time to put together the money. Or, they want to go as long as they can without having to lay out all the cash.

Our homeowner in Ventnor, NJ didn’t follow this path. Instead, he called us about replacing his water heater and boiler — both were 22 years old and past their prime — before either of them broke down.

As a result, he had the time to think about the best investment he could make for this new equipment.

He was interested in some of the newest features that come with the latest-and-greatest in heating and cooling. And, he wanted something energy-efficient. That way, he’d use fewer fossil fuels and pay less on his energy bills.

We reviewed some options with him, and he found just the thing he was looking for: A Combi water heater and boiler — one unit that does it all.

In this case study, we’ll cover:

And, if you’d like to learn more about upgrading your home’s HVAC system in South Jersey, call or email us here at Broadley’s for a free consultation!

Problem: The boiler and water heater in this Ventnor, NJ home were 22 years old and on their last legs. Our homeowner wanted to replace them before they broke down. And, he wanted to make the best investment in terms of energy-efficiency.
Solution: Installed a new Combi boiler and tankless water heater. This one unit handles all the heating needs for this home. It’s one of the most energy-efficient solutions on the market, takes up a fraction of the space, and provides endless hot water!

We could write whole articles about how to know your heating and cooling appliances are on the way out — and we have! You can click the links below to go more in-depth.

For now, here are a few things in particular that our Ventnor, NJ homeowner noticed:

Cold Spots In The Winter

Last winter, our homeowner noticed a room or two not getting as warm as they used to. He joked about there being a ghost in the house when he felt a chill!

This winter, the problem was even worse — a sign that it wasn’t supernatural. Instead, it was the boiler struggling to keep up.

Meanwhile, there was a year-round problem brewing: the water coming through the faucets and showers wasn’t nearly as hot as it used to be.

Like the boiler, this meant the water heater was also on the way out. It couldn’t maintain the temperature setting.

Along with the two problems our homeowner noticed, he was paying more than ever on his gas bill — even though he wasn’t getting the same treatment he used to.

This is also common: As your heaters work harder to do what they used to be able to do, they need more resources to do it.

The Units Were Getting Old

Just the age alone of the boiler and water heater were reason enough to consider replacement. Most units don’t make it to 15 years old, let alone pass the two-decade mark.

Our homeowner had kept them maintained very well over the years, and as a result, he went along time without needing a replacement. Now, he could take his time and weigh his options.

Why A Combi Boiler And Water Heater Is Worth The Investment

The Combi boiler and water heater is becoming more and more popular in South Jersey homes. Our homeowner immediately saw the benefits behind the price tag:

First is the convenience —- and attractive cost — of one unit that does it all. The price tag may be more than a single boiler or water heater. But, it’s one sleek model that handles the job of both these appliances.

Next, the Combi boiler uses a fraction of the energy that our homeowner’s older models used. The savings come on two fronts: The improved design and the new unit’s age.

First, the new Combi has a 96 percent AFUE rating — only four percent of the energy it uses gets wasted in the exhaust.

By contrast, the old ones were installed before today’s efficiency standards were in place. So, they started closer to 70 percent AFUE.

And, they became less efficient each year. According to most estimates, they were probably only 70 percent as efficient as they were new.

So, by now, they were wasting nearly 40 percent of the energy they used!

They Take Up Very Little Space

Square footage almost always takes a back seat to energy efficiency. Still, here it’s really worth mentioning: Our homeowner took back a considerable chunk of his home by dropping two large appliances for one wall-mounted unit.

And, as anyone near the Jersey shore will tell you, space is at a premium when your home doesn’t have a basement.

Now, instead of taking a huge closest, our homeowner can now use most of that space for storage, winter coats, or whatever he likes. The Combi is a sleek, skinny panel mounted on the wall well above the ground.

Benefits Of A Tankless Water Heater 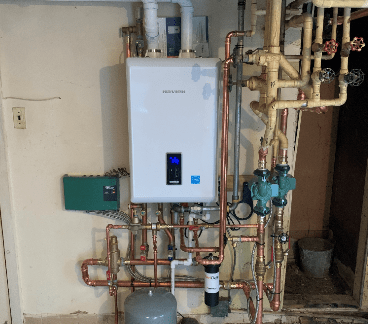 All this was great, but what really convinced our homeowner that a Combi was right for him was the allure of a tankless water heater.

As anyone down the shore will also tell you, hot water is at a premium in the summer. When the whole family gets back from the beach, the last one in the shower has to wash up quickly or risks catching a chill.

Not with a tankless system! Instead of storing a few dozen gallons of warm water all the time, the Combi warms up the water only when you turn on a tap. Then, it does so instantly so the first drops coming out are already warm.

You don’t wait a minute or two for things to warm up. And, you never run out — the system continuously warms up the water as it passes through!

Don’t wait for a breakdown to upgrade your heating system. With a Combi water heater and boiler installation, you can improve your comfort while lowering your energy bills. Call or email Broadley’s for a free consultation in Ventnor or anywhere in South Jersey.